How do Property/Marital/Maintenance rights in India change on conversion to another religion?

Personal laws are a collection of laws governing and controlling relationships resulting from certain factors linking two or more people. In addition, personal law regulates and governs subjects or areas of a private domain such as marriage, divorce, maintenance, inheritance, minority, and guardianship, etc. Unless there are few, scriptural laws that are divided and endorsed by religions are supported by most of the non-public laws in India. Through this article we look at how these rights get altered if an individual in India chooses to take up a new religion. 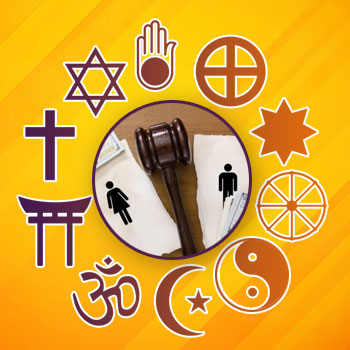 Religion is a question of faith or belief. The Indian Constitution acknowledges the importance of religion in the lives of the people of India, and hence provides for the right to freedom of religion in accordance with Articles 25 to 28. A secular model is envisaged by the Constitution of India and provides that every person has the right and freedom to choose and practice his or her religion. The Apex Court has held in a number of cases that secularism is the fundamental framework of the Constitution. Islam, Hinduism, Jainism, Buddhism, Sikhism and Christianity are predominantly practiced by people in India. There are religion-specific laws in India and Goa is the only state recognized as the Goa Civil Code to have a Uniform Civil Code. The Constitution encourages religious peace, which means that the people of India show respect and affection for the country's various religions.

Impact on Property when an individual converts to another religion

The Hindu Succession Act regulates the Hindu Undivided Family (HUF) and, according to the statute, Hindus who may have converted to some other religion can still claim their ancestral land.

However, unless they are Hindus at the moment when succession opens, the descendants of a convert do not have the right over such ancestral property. A decision like this was upheld in Shabana Khan v. D.B. Ors and Sulochana. 2008, in which the High Court of Andhra Pradesh held that disinheritance as a result of conversion to another religion is only applicable to children born after such conversion to the Hindu and would not extend to the convert.

In its recent judgment in Balchand Jairamdas Lalwant v. Nazneen Khalid Qureshi (Appeal from Order No. 1175 of 2014) of 6 March 2018, while addressing the question of whether a Hindu who has converted to Islam is excluded from receiving property from the parent who dies intestate, the Bombay High Court held that the religion of the individual at the time of birth has been determined while determining the inheritance.

Facts: The Respondent/Plaintiff sister filed a Notice of Motion (No. 956 of 2010) in Suit (No. 3480 of 2010) in the trial court for an order of injunction preventing the defendants, including the Appellant/Defendant brother, from creating third-party rights in respect of suit premises, i.e. residential flat in Matunga (West), Mumbai, as the property of her deceased father that was self-acquired. The Respondent/Plaintiff has five sisters and the brother of the Appellant/Defendant and asserted her share of the property in the action. In 1979, the Respondent/ Complainant married a Muslim and converted her faith to Islam. The Appellant/Defendant challenged the Notice of Motion on the basis that the Respondent/Plaintiff had lost her right to change her religion on the property of the suit. The trial court allowed a prima facie case to be considered by the Notice of Motion and the defendants were restrained from creating third party rights. An appeal against the order of the trial court enabling the Notice of Motion was subsequently lodged.

Judgement: The provisions of Sections 2 and 26 of the Succession Act were addressed by the High Court and it stated that the two provisions had to be read together and not in isolation. On reading the two clauses, the Court was of the opinion that the operation of the Succession Act would not preclude the convert himself or herself. In its wisdom, the legislature did not have a conversion under the disqualification caption.

Although relying on the decision of 26 September 2017 in Nayanaben Firozkhan Pathan @ Nasimbanu Firozkhan Pathan v. Patel Shantaben Bhikhabhai & Ors., Special Civil Application No. 15825, the High Court held that Personal Law is applicable to a person who, for the purposes of marriage, guardianship, etc., is converted to Islam, Christianity or any other religion. However, to remove the anomaly, the religion of the individual at the time of birth must be taken into account when determining the inheritance.

The judgments in Shabana Khan v. D.B. were also relied on by the Court. Ors & Sulochana. 2007 755 DGLS(A.P.); E. Yeah. Ramesh & Anr. Oh, v. P. Yeah. Rajini & Ors. (2002)1 MLJ 216; In support of its opinion, Asoke Naidu v. Raymond S. Mul, AIR 1976 Cal 272. In our secular state, where every person is free to acknowledge and practice any religion as his or her conscious choice, the Court has further referred to the guaranteed right to religion as a fundamental right.

In its opinion, the Court accepted the fundamental right of a person to freedom of religion and established that the religion of a person at the time of birth must be taken into account in matters of inheritance. A convert is therefore not excluded from the application of the Succession Act to inherit the property of his or her father.

Indian Succession Act, 1925: The rules set out in the Indian Succession Act regulate Indian Christians and the only aspect that is relevant in this regard is that the deceased should have been a practicing Christian. It is well known in Christianity that the faith of the heirs is immaterial and the only material reality is that the deceased should have belonged on the date of death to the Christian religion. For an adopted child, the rights given to a biological child are not accepted.

Thus, an individual who converts from Hinduism to another religion could not inherit from the Hindu relationship under Hindu law. His right to inheritance ends with conversion. Similarly, under Muslim rule, the inheritance of property is forbidden for a convert from Islam to any other faith. The mentioned rule was abrogated by the Abolition of Caste Disabilities Act, 1850. It is also possible to call this clause the Freedom of Religion Act. All disabilities relating to the conversion of faith have been excluded by the above provision. It is subject to other laws defined by the authorities concerned.

Effect of Conversion on Marital Rights:

Effect of conversion on right to claim Maintenance:

A contract of hire, is governed by the provisions of Chapter IX of the Indian Contract Act. It usually covers the common day finance agreements like purchase of consumer durables like Motor Vehicles, Computers, Household appliances like Televisions, ...

A lease of immovable property is a transfer of a right to enjoy such property, made for a certain time, express or implied, or in perpetuity, in consideration of a price paid or promised, or of money, a share of crops, service or any other thing of v...

A mortgage is the transfer of an interest in specific immovable property for the purpose of securing the payment of money advanced or to be advanced by way of loan, an existing or future debt, or the performance of an engagement which may give rise t...

Will means the legal declaration of the intention of a person with respect to his property, which he desires to take effect after his death. It is a unilateral document and takes effect after the death of the person making it. It can be revoked or al...

Probate of A Will

Probate means copy of the will certified under the seal of a court of a competent jurisdiction. Probate of a will when granted establishes the Will from the death of the testator and renders valid all intermediate acts of the executor as such. It is ...

Inheritance in Absence of A Will under Indian Succession Act

The Indian Succession Act came into operation on 30th September 1925 and it seeks to consolidate all Indian Laws relating to succession. It has no retrospective operation and is applicable to intestate and testamentary succession.INTESTATE SUCCESSION...

Sale is a transfer of ownership in exchange for a price paid or promised or part paid and part promised. The transfer by way of sale of tangible immovable property of the value of rupee one hundred and above can be made by a registered instrument. Th...

Fall Out of Real Estate Boom- A Consumer's Perspective

The boom in the real estate saw emergence of many builders, who played upon the emotional side of human nature to own one's own dream house, commercial space etc. Besides the ever rising prices of the houses/flats etc attracted many to invest in ...

Real Estate in India- An Attractive Venture For Non-Residents Indians.

Introduction:      Though the expression "Real Estate" has not been defined in any statute in India, broadly speaking this expression would mean lands and buildings.Real estate is stated to be the second largest sector in Indi...