Status of Refugees: How to get asylum in India?

When people leave their home country in search of safety in another, they will apply for asylum, which gives them the right to be accepted as refugees and gain legal protection. An individual seeking asylum must prove that his or her fear of persecution in their home country is justified. Asylum seekers and refugees from India's non-neighboring countries are supported by the UNHCR in India. 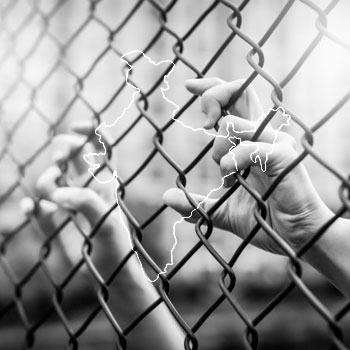 India has one of the world's largest refugee populations. Despite the fact that India serves a diverse population of refugees, including Syrians, Afghans, Palestinians, Persians, Ethiopians, and Christians, among others, the country lacks clear refugee laws and policies. The Refugee Convention describes a refugee as a person who is â€œoutside the country of his nationality owing to a well-founded fear of being persecuted for reasons of ethnicity, faith, nationality, membership of a particular social group, or political opinion and is unable or unwilling to avail himself of the security of that country due to such fear.â€ Despite the fact that India is not a signatory to the 1951 Refugee Convention or its 1967 Protocol, and lacks a national refugee security policy, it continues to accept refugees from neighbouring countries. If the status of a refugee is not covered by the Indian government, asylum seekers can apply to the UNHCR for refugee status.

â€œUnder Indian law, the term â€œforeignerâ€ is the only reference to aliens of any kind; this places refugees, immigrants, and tourists in the same broad category.â€

History of the Indian refugees

India was responsible for the care of 20 million refugees for the first twenty-five years after independence. This was attributed to India's and Pakistan's partition. As a result, India was tasked with providing relief to the displaced people of West Pakistan. â€œInitially, 160 relief camps were built at a cost of about INR. 60 crore.â€To counter the refugee crisis, the Indian government has taken a range of measures. The most important measure taken by the government was the Rehabilitation Financial Administration Act of 1948. The most pressing question when the definition of displaced person is granted in this Act is: what will be the legal status of these displaced persons? A 1951 convention on refugee status was the first to define the word "refugee." After seeing the conditions of displaced persons travelling from India to Pakistan and vice versa, it became clear that their situation was close to that of refugees.

When the Dalai Lama and his followers fled to India in 1959, India had to deal with another refugee influx. The Dalai Lama and his followers were given political asylum by the Indian government. Another refugee crisis that our nation had to deal with was in 1971, when ten million East Pakistanis migrated to India. India was compelled to offer shelter to the refugees due to its humanitarian obligations.

In 1983 and 1986, after a brief respite, India was once again impacted by the influx of refugees from Sri Lanka and Bangladesh. According to the World Refugee Survey, India is home to about 400,000 refugees, as well as at least 2,000,000 refugees and 237,000 internally displaced people.

Protection granted to the asylum people in India

The treatment of asylum seekers was classified into three categories:

Special treatment: â€“Article 28 of the 1951 Refugee Convention provides for the protection of one's identification and travel papers, as well as an exemption from fines under article 3(1).

Law for refugees and displaced people

Several refugees have found asylum in India. Numerous legislative acts were passed and released in favour of these refugees under the Indian Constitution's Seventh Schedule. However, in the current setting, some of the initiatives have lost their significance. Following India's partition and before the Indian Constitution took effect, the following legislations were enacted:


Following the implementation of the Indian Constitution, the following acts relating to refugees, evacuees, and displaced persons were passed:


â€œIn the dealings of organised people with one another, the state shall strive to cultivate respect for international law and treaty obligations,â€ according to Article 51. The Directive Principles of State Policy, enshrined in Article 51 of the Constitution, demonstrate the spirit with which India approaches her foreign relations and obligations.â€

â€œParliament has the power to make any law for the whole or any part of the territory of India for enforcing any treaty, agreement, or convention with any country or countries, or any decision taken at any international conference, association, or other body,â€ according to Article 253 of the Indian Constitution. â€œEntering into treaties and agreements with foreign countries, and enforcing treaties, agreements, and conventions with foreign countries,â€ according to Entry 14 of the Union List of the seventh schedule. Article 253 read in conjunction with Entry 14 makes it clear that Parliament's power to enter into treaties includes the right to encroach on the state list in order for the union to enact a treaty with it. As a result, any legislation enacted in compliance with this Article that gives effect to an international convention is not invalidated because it includes provisions concerning state subjects.

The role of the judiciary

If any of the refugees are captured or arrested by Indian authorities, they risk being refouled, repatriated, or expelled. Many arrested for illegally staying in the country can be kept indefinitely under administrative orders without facing charges. The Foreigners Act gives the Indian government full and unrestricted power to deport foreigners. The Supreme Court of India granted the government "full and unfettered" power to expel foreigners in the case "Hans Muller of Nurenburg vs Superintendent, Presidency." The Supreme Court upheld the previous ruling in â€œMr. Louis De Raedt & Ors vs Union of India.â€ In the same decision, the Supreme Court ruled that foreigners had the right to be heard.

In the case of "Ktaer Abbas Habib Al Qutaifi vs Union of India," the Gujarat High Court ruled that the concept of non-refoulment prohibits eviction of a displaced person if his life or freedom is jeopardised as a result of his caste, religion, nationality, enrollment in a specific social gathering, or political conclusion. Its implementation ensures that everyone, regardless of ethnicity, has the right to life and liberty.

Problems faced by refugees in India

How to apply for Asylum in India via the UNHCR?

You should contact the UNHCR if you and your family wish to apply for asylum. The first phase in the asylum process is registration. Registration is the process of registering, verifying, and updating information on persons of interest to the UNHCR. The registration process can be completed at the UNHCR Registration Center in Delhi, the UNHCR office in Chennai, or a partner agency.


You will be enrolled the day you arrive at the UNHCR Registration Centre, or as soon as possible afterwards. All members of your family who are currently residing in India and have not yet registered with UNHCR must accompany you. Please bring your full address and phone numbers with you when you come in for your registration interview.

Please carry any of the following documents (originals, expired versions, or copies) to UNHCR for registration and display them during your registration interview:


Please notice that you can still register with UNHCR if you don't have any of the above documents.

You'll be asked to fill out a registration form with basic personal and family information, such as your name, date of birth, education, hometown and country of origin, contact information, and so on. On the form, you'll be asked to justify why you left your country and why you won't be able to return. If you are unable to complete the form, you will be assisted. A Registration Officer will conduct an interview with you and go through the application form with you, as well as ask you follow-up questions. Your photograph, fingerprints, and iris scan will all be taken.

What happens after you apply for asylum?

You'll be given information about the next steps in the refugee status determination process after you've completed the application process.

You'll be granted a case number and a "Under Consideration Certificate," all of which acknowledge that you've applied for asylum with UNHCR India and that your application is being considered. Following that, you'll be given information about the next steps, which include your refugee status determination interview, during which you'll be asked detailed questions about why you're seeking asylum. Please keep in mind that the interview for determining refugee status will take up to 20 months from the date of registration. Following this interview, UNHCR will determine whether or not you are a refugee based on the details you provide and information about the situation in your country of origin.

Getting business and employment visa for India

A valid Indian passport and a valid Indian visa are the two essential requirements that a foreign national who intends to visit India must possess. Even a minor child of foreign origin must have a valid passport for traveling India. A Vis...

Procedure for getting OCI registration and PIO card

Gambling in India is under strict control except for a few categories like horse racing and lotteries. Gambling in India, being a state subject entitles the states to make formulate laws to govern such activities within their states. The Public Gambl...

There has been an outpour of emotions and reactions in India since the day Devyani Khobragade, Indian Diplomat was arrested, detained and strip searched in New York. She was released on bail two hours post...

IntroductionIndia is much more than just a developing country. Going by the travel records, India welcomed about 6.29 million tourists in the year 2011 from across the globe. It was a direct increase of 8.9% from the 5.78 million of the year 2010. Th...

Are you planning on immigrating in search of better work opportunities or with plans of settling abroad?Well, the process of immigration does not involve merely booking flight tickets for your destination and obtaining a visa. The law requires you to...

As Indians we know India in itself is an amazing nation and even the world agrees with that, however, grass is always greener on the other side and that is why Indians desire to immigrate abroad. The desperation to immigrate to a differe...

Geographical Indication (GI) Tag and its Registration Process under GI of Goods (Registration and Protection) Act, 1999

History of GI tag in India: GI is typically used in combination with conventional extraction, refining, and marketing, including product branding, for agricultural products. The GI tag, on the other hand, faces problems in terms of quality management...